The day was brisk on 2.6.2019 as I had the distinct pleasure of accompanying the Appliances Connection design team and our Miele sales rep, Jeanne L on a day trip. Our destinations were a tour of the Good Housekeeping Institute in the Hearst Tower on 57th St followed by a visit to the Miele showroom in the A & D Building on 58th. 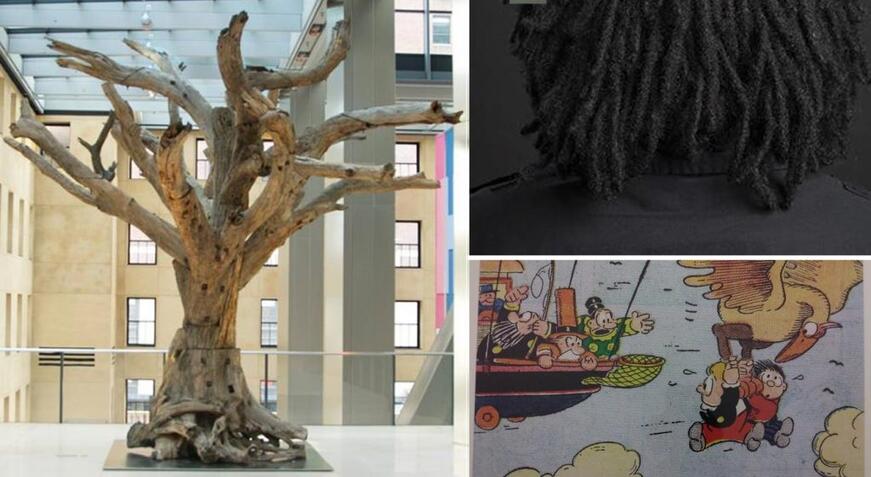 Hearst Tower Artwork. Clockwise from left: Ai Weiwei's Tree Number 11, Kris Graves's The Artist, Harold Knerr's Katzenjammer Kids We gathered in the lobby of the Hearst Tower, which is essentially a modernist gallery filled with art of many different genres and mediums. There we were met by Sara R who handles Good Housekeeping?s sales and brand development. She informed us that we would have some breakfast before the tour.

Walking through the cathedral-like first floor and mezzanine, Sara led us to the elevators up to the 29th floor. We moved through the hallway flanked on the left by stunning views and on the right by stark testing labs. As we turned into what I expected to be an equally sterile cafeteria, we were greeted by something of a surprise.

We entered a decadently rococo parlor. On the walls hung Edwardian Era and Gilded Age artwork including an authentic Whistler painting. In the shelves sat early edition books, their pages crisp and brown. Stepping through an entryway, we encountered a beautiful dining room whose centerpiece was a splendid table with each place impeccably set with polished silverware. We were graciously greeted by Carolyn F, one of Good Housekeeping?s chief product testers.

We took our seats and, over freshly baked bread and pastries, Sara and Carolyn in turns told us the history of our surroundings. The parlor and dining room once graced the original Hearst Magazine Building in the early 1900s, which now serves as the current tower?s base.

Before the new tower's construction, the rooms were disassembled with their contents?meticulously catalogued and stored. Upon construction?s completion in 2006, they were rebuilt and decorated exactly to their previous specifications. Thus, we were sitting in the same rooms that have played host to William Randolph Hearst?s guests who included presidents, celebrities, and other luminaries.

Our first course of parfait arrived on Willow Blue china. It had three layers with the top two being homemade granola generously spread over thick, creamy Greek yogurt. Scooping these revealed a multi-colored variety of fresh fruit. To list them all would take a ridiculous amount of column inches, but included were raspberries, blueberries, cantaloupe, pineapple, and kiwi. The fruit combination had an overall tartness that was a nice accompaniment to the pleasantly sour tang of the yogurt. The granola brought a sweetness to the palate along with a satisfying crunch.

The second course was a frittata and mixed green salad. The plating was lovely with the vibrant colors of the food framed by the elegant blue of the china. The eggs in the frittata had been thoroughly whipped and aerated resulting in a light, fluffy texture. It was the perfect conveyance for the filling of feta, sweet pepper, and spinach.

The leitmotif of flavor was the richness of egg accented by the slight saltiness of feta occasionally enhanced by grains of briny sea salt. These blended melodiously with the spinach?s touch of bitterness and the pepper?s subtly caramelized taste. The salad was unspectacular but competently prepared. However, one really doesn't expect much extravagance in a breakfast salad.

Left to right: Jacqueline, Lada, Muna, Jeanne L, Daniela, Michael, and Carolyn F Throughout the meal, we were delighted by Sara?s and Carolyn?s easy conversation and we all became comfortably familiar with each other. Nourished and with a newfound spirit of camaraderie we were off for a behind-the-scenes look at Good Housekeeping. I?ll delve into that in Part 2.
Connect With Us
Newsletter