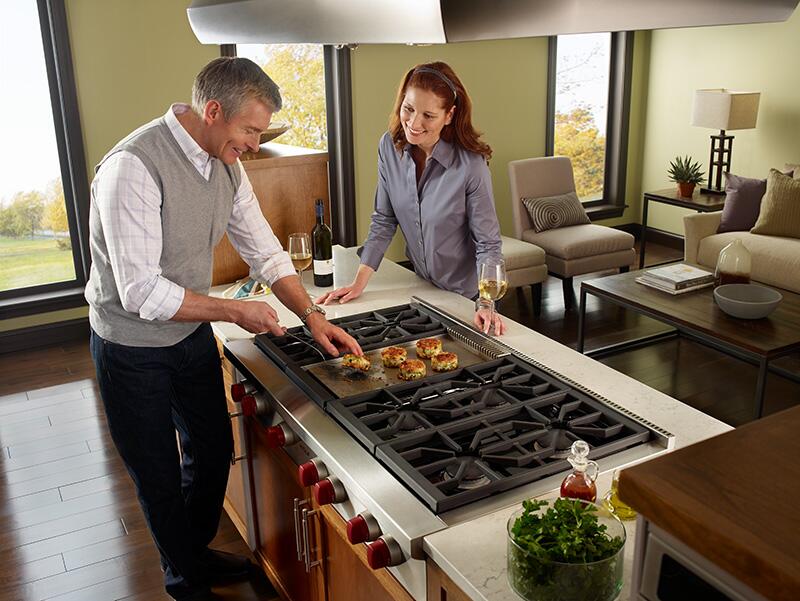 By April Khan, Appliances Connection This is a topic that has always been an interest of mine. Partly because I had always used electric ranges growing up, and partially because I moved to the UK where gas ranges were everywhere.

When I went to the UK I was forced to use a gas cooktop. The reason, I say forced is because it wasn?t my primary choice. You see, I had grown up with a fear of gas ovens and fireplaces. When I was very young, I saw a tragic news brief about a whole family that had accidentally left their burners on unignited. Because of the images that followed, I vowed to never use gas cooking appliances in life.

Obviously, I was a young child, so it was kind of traumatic (should have listened to my mom and gone to bed when I was asked).

As a junior chef (in my own mind) I am beginning to realize just how important gas is to cooking with precision. I cook a lot of Indian and Spanish foods, so a good fire contact under a heavy cast-iron pan is precisely what?s needed at all times. I also bake a lot so gas is a must.

I decided to look into the whole gas safety thing just for peace of mind.

There are plenty of safety measure that you can use to safeguard your house from tragedies like the one I listed above. There are also a number of things you can do to educate others about gas safety.

First, we?ll get to some information you might find online that totally isn?t true.

This is probably the biggest myth about gas ovens circulating the web today. Five years ago, there was a study that pointed to Fracked Natural Gas as a possible carcinogen. However, this study was grossly taken out of context. In fact, Cancer Research came out immediately to clear up this misconception.

The original study, published by the British Medical Journal, found that potentially troublesome carcinogens were emitted in the cook?s range (the area around the range where the cook stands) around gas ranges. This study compared the cook?s range surrounding both electric and gas ranges.

The chemicals they detected were:The article ends by saying ?but are the chemical ranges found dangerous?? Of course that scared the life out of everyone as the article mentioned no levels and no result ranges. Let?s clear that up.

Oh, and as a side note, the study was conducted on participants in rural China, Taiwan and Hong Kong. Why is this important? Ventilation is poorer in these kitchens and there is a lot more frying involved in everyday cooking than there is in the average western kitchen. Lastly the test was conducted in a food service environment, not in a home. So, to conclude, you?ve got nothing to worry about.

CO is an odorless gas.? It is emitted from any object that uses fuel as an energy source. This includes cars, stoves, fireplaces and furnaces. Carbon Monoxide itself is deadly in moderate concentrations, which is why it?s super important to have these items serviced regularly. It?s also important to use them in well ventilated areas.

According to the United States Consumer Product Safety Commission, most healthy persons are okay in concentrations of 1 to 70 ppm; however, heart patients may experience increased chest pains. Levels greater than 70 ppm begin to cause mild symptoms of carbon monoxide poisoning such as headache, nausea and fatigue. Concentrations over 150 ppm can contribute to more severe symptoms such as disorientation, unconsciousness and even death.

So how do you know if your gas appliances are emitting too much CO?

How much Carbon Dioxide does the average kitchen range produce?

The average kitchen range is designed to produce less than 800 ppm; however, field technicians can calibrate ranges to less than 50 ppm?s.

What if the Carbon Monoxide detector begins beeping?

If the alarm is beeping and the batteries have been changed, step outside immediately. DO NOT try to turn off the stove or range.

How to avoid CO poisoning

If you smell gas when you?re cooking, turn off the burners and call your gas provider.

Do not use your oven or range as a heating source in the winter.

Use a cooking hood to ventilate the kitchen and remove air pollutants. If you don?t have a hood, open a window to remove potentially dangerous chemicals.

Lastly, and more importantly, always have your CO detector tested and change the batteries often.
Connect With Us
Newsletter