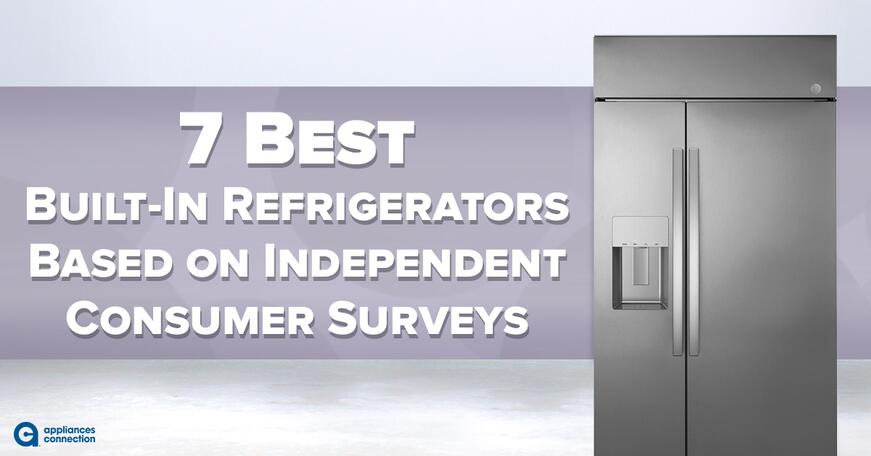 Built-in and integrated refrigerators are swiftly becoming required features in luxury kitchens. As the descriptor implies, built-in models are installed into cabinetry. Integrated models are built in but also sport custom panels to seamlessly blend in with surrounding décor. In this post, we’ll review consumer feedback of a sampling of premium built-in and integrated refrigerators from a selection of high-end brands.

Thermador is one of the most highly-rated refrigerator brands according independent ratings agencies. Their reliability is virtually unparalleled. Owner satisfaction with Thermador integrated refrigerators is also at the top of the list with regards to being feature-rich and versatility. This column from the Freedom Series has been reviewed as one of the best models from one of the best brands. This panel-ready refrigerator column, especially when paired with one of Thermador’s panel-ready freezer columns, will heighten the cachet of any kitchen.

The areas where this one shines the most are incredible reliability, easy and precise temperature control, and low noise. A touch-screen TFT display panel contains easy-to-use controls, which allow for easy temperature control in multiple zones. The Cool Air Flow technology it uses includes a quiet fan as part of this energy efficient cooling technology, evenly distributing cold air throughout the unit. With a total capacity of 20.6 cu. ft. and 7 glass shelves, this built-in refrigerator has enough room to comfortably hold your food and beverages.

Bosch Benchmark is another leader when it comes to built-in refrigerator brands. It has been consistently rated as being a brand with overall great reliability and owner satisfaction. While average scores of this model from independent consumer groups is a few points lower than Thermador's integrated refrigerator, it is brings significant value at a more affordable price. This stainless steel refrigerator is counter depth and includes a host of features to boast about.

This built-in refrigerator matches the 19.4 total cu. ft. of capacity the Thermador model has. As opposed to 7 glass shelves, this model has just two. This, however, is due to the Thermador model being a refrigerator-only column while this one is a combination refrigerator/freezer.These shelves are adjustable, so you can easily store large items with ease It also features two gallon-sized storage bins, for additional room to keep your produce fresh. Another helpful element is its SuperCooling function. If the refrigerator door is left open for a period of time, such as when loading just-purchased groceries, the temperature in the refrigerator compartment is dropped to swiftly cool the new items while preventing existing items from getting too warm.

No list of top refrigerators and refrigerator brands can be complete without including Sub-Zero. They are practically the byword of luxury refrigeration. They don’t, however, merely coast on pedigree. Since their inception in the 1920s, has continually been earned as evidenced by consumer accolades and loyalty to the brand.

This built-in refrigerator has the other is an absolute behemoth in terms of space. It holds a total capacity of 28.4 cu. ft. There is plentiful interior storage, with 8 shelves and 9.6 cu. ft. of room in its freezer. With the advanced food storage technology this refrigerator possesses, keeping temperature low in places like the crisper drawers becomes a given. It is a full-size food preservation system rather than just a refrigerator. This is a classic side-by-side refrigerator/freezer, with room on both doors for storage.

When it comes to picking some of the best built-in refrigerators, JennAir is an obvious choice. Though the brand is a relative newcomer to the luxury market, they’ve been manufacturing some of the most dependable American appliances for decades.

This is a 42-inch panel-ready refrigerator, which is perfect for those looking for a unit that’s big but not too big. It has an impressive 24.17 cu. ft. total capacity with 6.42 cu. ft. of freezer space. Differing from other refrigerators, the interior of this one is a dark obsidian color, which creates a striking contrast with the food and beverages stored inside. The TwinFresh climate control system uses separate compressors for the refrigerator and freezer compartments to ensure both your fresh and frozen foods are preserved on the optimal way.

GE is one of the world’s seminal technology companies and they produce appliances of all kinds. The Ur company has wavered in quality a bit according to consumer reviews. But their more upmarket brand, GE Profile brings to bear better customer satisfaction due to their units having a host of unique features.

The big one for this built-in refrigerator is its massive internal storage capacity. It has a full 24.3 cu. ft. of space, which includes 8.56 cu. ft. of freezer capacity. Additionally, it contains 4 glass shelves for ample storage. This 42-inch freestanding refrigerator is great for large families that need the extra space. It also features humidity-controlled drawers, which help preserve fruits, cheeses, and vegetables.

The company Liebherr, as a whole is active in all aspects of the industrial market. One of the reasons it’s one of the top brands in residential refrigeration, though, is because that’s all they do. Rather than spreading their attentions on ranges, dishwashers, etc. the only home appliances they make are refrigeration units.

This refrigerator has a standard width of 36 inches. It sports a total 19.5 cu. ft. capacity with 6 cu. ft. of freezer space. There are some advanced refrigeration technologies in this refrigerator, including SuperCool, SuperFrost, and DuoCooling. SuperCool creates greater cold reserves, which allows food you just put into the refrigerator to become cooled quickly. SuperFrost does the same, but in the freezer. DuoCooling creates optimal conditions within the refrigerator and freezer, which lengthens the shelf life of food.

You’ll need to keep reading after the next sentence. Viking gets some of the lowest ratings in independent consumer surveys. This comes with a caveat. Until 2014, Viking appliances were admittedly unreliable. That year, though, they were acquired by conglomerate, Middleby Residential who turned the brand around. Though lingering refrigerator models from the pre-2014 era still make it into surveys, Viking is now one of the most sought-after premium appliance brands.

This built-in refrigerator, with a large total capacity of 29.5 cu. ft. with a 48 inch profile, has a few features worth mentioning. Its ability to retain temperature uniformity is one of its strengths. The ProChill Temperature Management system helps maintain even temperatures to store either fresh produce or meat for long-term storage. An Odor Eliminator Evaporator gets rid of unpleasant odors, along with humidity, ensuring your food stays well-preserved.