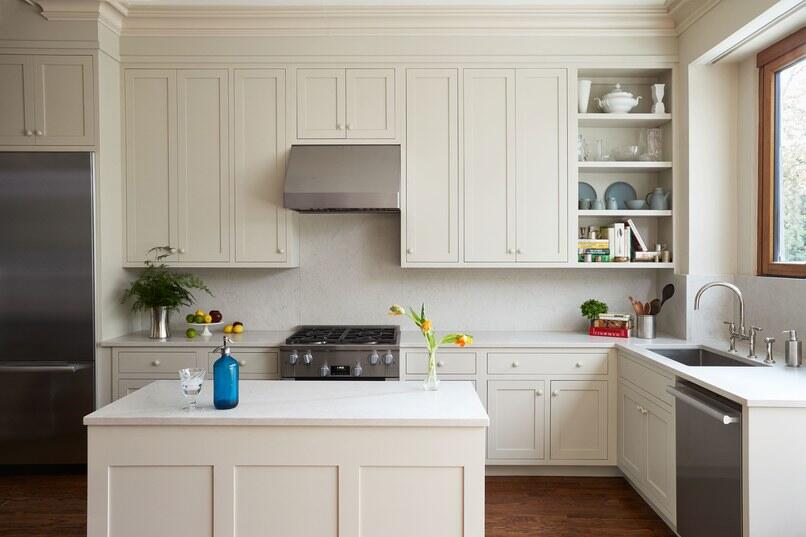 Brooklyn brownstones, those majestic, century plus old buildings have become the ultimate status symbol for New Yorkers. But renovating them, especially their kitchens, can be a pain.

Their shape, long and thin like a bowling alley, means the concept of ?open plan? is often wishful thinking. And the doorways, built apparently for ridiculously thin people of the last century, means transporting a 42 in wide behemoth of a fridge can create its own set of issues.

That said, getting a kitchen right in a brownstone can have stunning results. We take a look at 3 particularly impressive ones in Brooklyn.

Homeowners Larry and Nazli blogged on sweeten.com about their brownstone renovation in Bedford-Stuyvesant. They purchased it in 2015 as a derelict building with no water running, heat or electricity and finished it two years later.

Says Nazli about the kitchen, ?I love throwing huge parties and dinners, and I like to spend my alone time cooking. It?s also a natural gathering spot, so it was exciting to think about getting the most out of the space. Turns out the space configuration of a Brooklyn brownstone made it hard to do that, but it still served us well?I am super happy with a long island (11 ft long!), a BlueStar (42 in freestanding gas) stove, and the different stations for cooking, eating, making coffee, or baking.?

In order for the kitchen to feel connected to the rest of the parlor floor, Nazli had to make certain compromises. ?My solution was to forgo upper cabinets so there?s a clear line of vision from the front of the room all the way to the dining room. This created a storage challenge for me, of course, which we solved with a kitchen pantry.?

?We started with the house as it was,? Neuhaus said, ?and then explored how to best bring it into the 21st Century without losing its soul and history.? The wood and stone work particularly well around the house, maintaining the home?s warmth amid modern touches.

Says Neuhaus, ?So many people are afraid of the juxtaposition. Unless you are a traditionalist, your historical house doesn?t have to have a traditional kitchen. Don?t be afraid to express yourself. In this house, the contrast of old and new serves to inform and strengthen both.?

The AGA Elise Series freestanding dual fuel range is a particularly powerful statement in the kitchen along with the Viking 5 Series built in side by side refrigerator.

Writer and editor Dan DiClerico writes about renovation projects for various publications. But being an expert didn?t make the renovation of his Brooklyn brownstone any less stressful.

?We bought the place from a woman who had lived here for probably 30 years?it?s a three-story brownstone reconfigured with a rental unit on the top floor, and the bottom two units were a second home. It was pretty badly chopped up,? he told Architectural Digest. When it came to the kitchen, he decided to completely flip the script and move it to another floor entirely.

?That back area of the parlor floor had been a bedroom, and part of that had been the studio, so there was a large bathroom with a whirlpool tub and this weird little kitchenette space. That?s where we spent a lot of the budget and a lot of the brain space, coming up with a kitchen design.?

The refrigerator, range, and built-in dishwasher are by Miele, the range hood is by Zephyr Ventilation, and the Perrin & Rowe faucet is from ROHL The countertops are Caesarstone in London Grey.
Connect With Us
Newsletter